Seniors are one of the fastest growing age groups in British Columbia, according to a story and video segment recently released by CTV News.

CTV News reported that the demographic trend is putting a major strain on social services, so a local non-profit, supported by United Way, is helping seniors stay in their homes and stay active as long as possible. 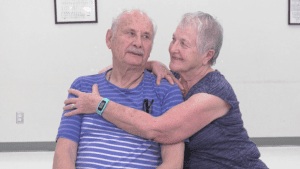 The activities are funded through the United Way Seniors Active Aging program.

“Programs like Active Aging really provide an opportunity to create new support systems, to be able to enhance one’s self-esteem, sense of belonging and sense of purpose,” explained Kahir Lalji, director of provincial and population Health for United Way of the Lower Mainland.

United Way supports 28 Active Aging programs in communities across the province. They include outreach services, caregiver supports, community kitchens, recreational services, arts and cultural programs – all of which have been designed to improve the emotional and physical well-being. More than 7,000 seniors participate every year.

Don Olds and his wife began attending chair yoga classes in Mission about a year ago.

“It’s so easy to sit and around and get stiff and old. I’m trying to avoid that as much as possible. Well, at least the stiff part. I can’t do anything about old,” said the 88-year-old jokingly.

Olds has lost much of his central vision and was diagnosed with peripheral neuropathy 10 years ago.

“Which affects the nerves in my feet and my balance is a real problem,” explained Olds.

He says he’s noticed significant improvements to his balance and flexibility since he joined the class.

“One of the horrors they don’t like to think about is a broken hip, and falls are very bad news for anybody gets to be a certain age and stage,” said Olds.

“We’ve seen this really impact the trajectory of which people experience late life illness and in fact reverse sometimes the onset of acute illnesses,” said Lalji.

“You see that people don’t rely on their walkers as much and they’ll use a cane every once in a while. So these are small little things that make a huge difference to them,” explained Narang.

Those little things are what keep Olds moving. After 62 years of marriage and eight grandchildren, he says he doesn’t plan on slowing down anytime soon.